Historic Marine Education filed a civil complaint against Murphy on Feb 17, 2015 seeking the return of its cannon and related equipment.

The Trial Courts of the Commonwealth of Massachusetts ruled that Murphy had committed the act of conversion, the civil act of theft, and ordered Murphy to return the cannon and all of its related property or pay damages.

Murphy has opted to pay the damages and maintain possession of the cannon and its related materials instead of returning the items to Historic Marine Education. Murphy has exhausted all of his appeals.

Stan Kumor, President of Historic Marine Education, stated, “We are pleased that the matter has been resolved in our favor but disappointed that the courts have allowed Mr. Murphy to pay damages instead of returning our property. However, now the organization will be able to continue to fully dedicate our time, energy and spirit to educating the public in cooperation with our partners.”

Murphy was formerly a member of the organization and dismissed by more than a 2/3 majority vote of the members present at a Special Meeting, Feb 21, 2015, due to the civil action.

Copies of the court judgments are pictured below, click on them to open a larger copy. 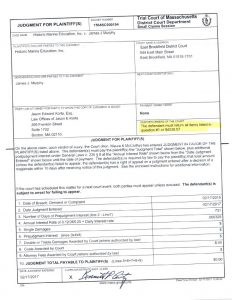 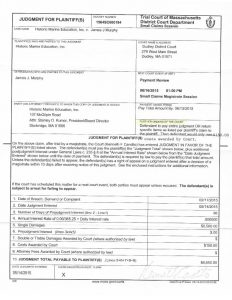 Based in the oldest Marine Barracks building in the United States, Historic Marine Education, Inc. (HME) strives to educate the public about the early years of the United States Marine Corps and the War of 1812. A non-profit 501(c)(3), HME provides multi-generational educational programs about the people, material culture and detailed history related to the sea services by using the public outreach program, “The USS Constitution 1812 Marine Guard.” HME is partnered with the non-profit USS Constitution Museum, the USS Constitution (US Navy) and the US National Park Service.