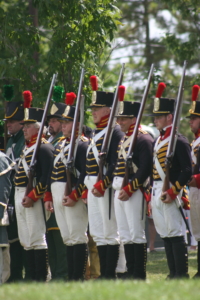 Essex’s Annual Burning of the Ships Day commemorates one of the worst events in the town’s history.  During the War of 1812, on a cold April night in 1814 a British raiding force of Royal Navy sailors and Royal Marines rowed six miles up the Connecticut River to burn the privateers of Pettipaug, now the Town of Essex. Before the raid was over they had burned 27 ships and taken or destroyed thousands of dollars’ worth of ships stores. The raid resulted in the greatest loss of American shipping during a single event of the entire war. No US regular forces were in the area so the local militia made a token show of resistance but only two British sailors were reported wounded. US Marines from the frigates United States and Macedonia at that time blockaded into New London arrived to late to have an impact.